The Academy has the following affiliations;

Originally trained as a school teacher, Steve left the profession in 1986 to teach martial arts and self-defence full time. Operating under the banner of Steve Cowley’s Martial Arts Academy he established a large network of clubs and taught many hundreds of students over a 20 year period. Together with his wife Lynn, he achieved a dream to open a full time martial arts and fitness centre in High Wycombe in 1999. The academy prospered and grew and became a recognised centre of martial arts excellence for the local community. 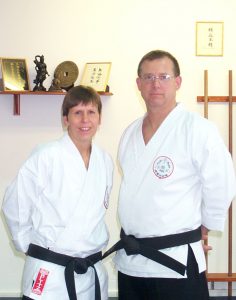 Steve has always taught martial arts as a holistic discipline of body, mind and spirit, believing that it offers many benefits to its participants that extend way beyond simply learning a few self-defence skills. For him, the real strength of the martial arts lay in the positive developmental changes that practitioners often underwent.

After a four year spell living in Spain, Steve came back to teach at the Wycombe centre in 2011, before returning to full time school teaching in 2013. In 2015 he met Mark and began his journey in Wing Chun kung fu under his guidance.